Discover the Sig Sauer M17/M18 – As I noted in a recent article, the removal of the Beretta 92FS, aka the M9, as the official standard sidearm of the United States Armed Forces – a role it ably served from 1984 to 2017 – has been somewhat controversial. The decision stirred a range of emotions in the military community and among firearms enthusiasts, regardless of military or civilian status. Some say “good riddance” to what they perceive as an undernourished pile of junk.

Many others shed – mostly symbolic – tears of farewell to a superbly accurate and reliable pistol. Regardless of sentiments on the M9, the fact remains that its successor, the SIG Sauer P320 AKA the M17/M18, is here to stay.

Much to the chagrin of big caliber aficionados who think that packing an automatic pistol in any caliber other than .45 ACP, or maybe .40 cal/10mm if they’re a bit more open-minded, will leave the shooter hopelessly underarmed against anyone or anything larger than a rabid squirrel, SIG’s “new kid on the block” retains the same 9mm chambering as “Old Man Beretta,” so to speak.

Without attempting to delve into another endless and tedious 9mm vs. 45 debate, the smaller cartridge ensures continuity of the gun’s caliber with America’s allies – NATO and non-NATO – and allows a larger number of rounds to be loaded into the magazine – 17 rounds in the case of the M17 / M18 – without sacrificing ergonomics too much.

So what exactly did SIG do to win the US Armed Forces contract against fierce competition from Beretta USA, FN Herstal, CZ, Smith & Wesson, United StatesIST and Glock?

“The military originally wanted a gun that increased in speed when targets came quickly into small spaces – like hallways, attics and balconies. The M17 exceeds all of these requirements… Users claim better accuracy with the M17… The M9 has been criticized for not having a rail system, not being modular, harder to conceal and taking hand is too big. The M17 answered the call and proposed improvements to these complaints. Give Beretta credit though, its entry into the competition fixed all those perceived flaws, but ultimately the Army and the rest of the Army settled on the Sig.”

Okay, fair enough, that tells us how SIG beat Beretta, but how SIG beat Glock, the real Timex of semi-automatic pistols – you know, “Takes A Licking, Keeps On Ticking”. Brent also answers this question, this time in another post:

In addition, there was the question of modularity and the possibility of being personalized. Both of these factors proved extremely advantageous with the M4 carbine, so the M17/M18 applies the same philosophy to handguns. As Sandboxx News’ Travis Pike explains:

“Modularity is important because not all missions and tasks are the same. The military must consider different environments, jobs, tasks and missions. The infantryman has different requirements than the human-intelligent (HUMINT) soldier or navy. An infantryman works best with a full-size combat handgun, potentially equipped with a weapon-mounted light, 21-round magazine, and red dot optics. The HUMINT guy or girl may need to conceal a gun, so they want a smaller gun without the optics, light and 21 round magazine. The M17 and M18 provide a full size model and a transport model respectively. They are effectively the same weapon, just different sizes. This decreases training requirements by simplifying the weapons manual.

In terms of customization friendliness, the M17/M18 has, among other things, the ability to easily accept sound suppressors – or “silencers”, as they are commonly referred to incorrectly – using a Picatinny rail that allows the gunner to attach optics such as red dot sights and the ability to swap sights on demand.

New M17 pistols, the newest US Army handguns, made by Sig Sauer, lie on a table as soldiers assigned to Allied Forces North Battalion familiarize themselves with the weapon replacing the M9 pistol, in Chièvres, Belgium, February 11, 2020. (US Army photo by Pierre-Etienne Courtejoie) 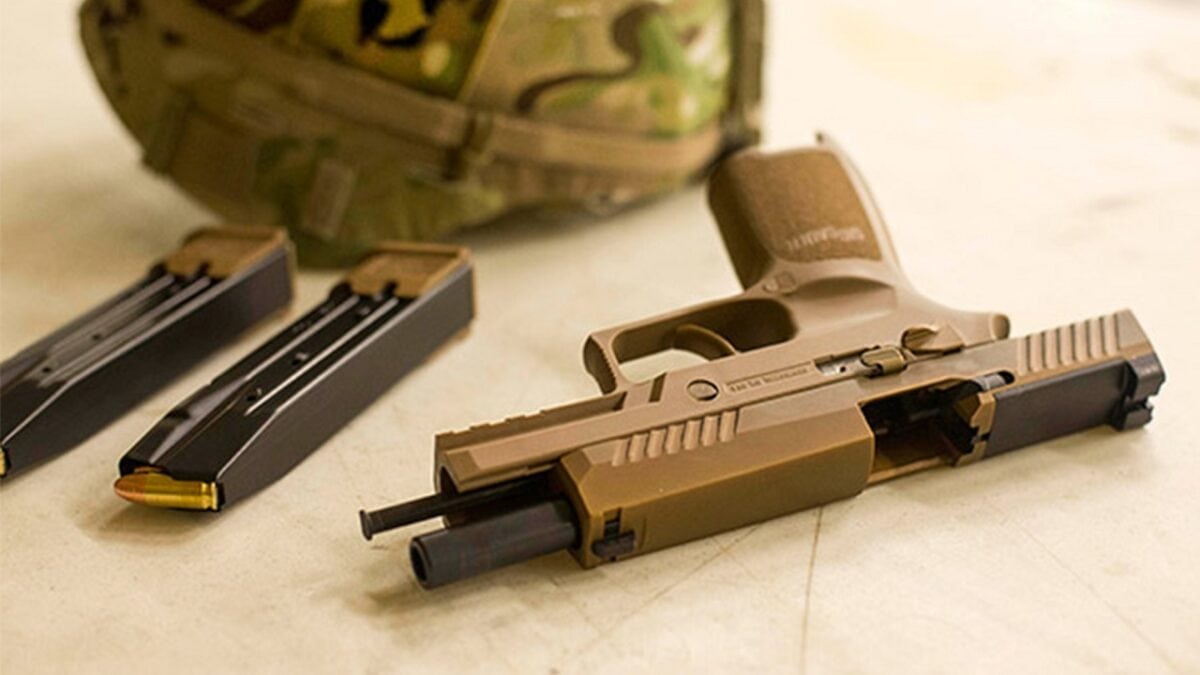 Seeing how the GIS (Schweizerische Industrie Gesellschaft) originally started as a Swiss companyit wouldn’t be too much of a stretch to call the SIG Sauer P320/M17/M18 “the Swiss army knife of handguns”.

Christian D. Orr is a former Air Force officer, federal law enforcement officer, and private military contractor (with assignments in Iraq, United Arab Emirates, Kosovo, Japan, Germany and the Pentagon). Chris holds a BA in International Relations from the University of Southern California (USC) and an MA in Intelligence Studies (Terrorism Studies Concentration) from the American Military University (AMU). It was also published in The Daily Torch and The Journal of Intelligence and Cybersecurity. Mr. Orr has 33 years of shooting experience, has earned expert pistol/small arms ratings with the Air Force, Customs and Border Protection (CBP), and Immigration and U.S. Customs (ICE), has won multiple shooting trophies, medals and awards through the Glock Sport Shooting Foundation (GSSF), International Defensive Pistol Association (IDPA) and Nevada Police and Fire Games (NPAF).