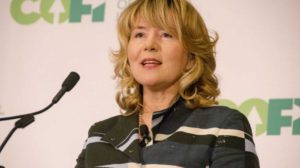 Susan Yurkovich (Chair of the BC Lumber Trade Council)

BC Council of Forest Industries President and CEO Susan Yurkovich said tariffs should be scrapped altogether.

“What we should really have is that there are no duties on softwood lumber that comes into the United States and that’s because they need our lumber and those duties make the purchase of the product more expensive for American consumers.”

“You have to understand that we are already in the fourth administrative review, so these duty rates may also increase again. There are no guarantees and what should really happen is to work towards a lasting solution.

Yurkovich was even more critical of the US government’s approach because it negatively impacts consumers and future owners.

“When you think about affordability challenges in the United States and you look at what comes out of the National Association of Home Builders talking about the impacts on consumers in the United States of these rights. It’s really time to fix this problem once and for all and we want people to use wood in their homes and buildings and in all kinds of products because it’s a good choice for the factory and these taxes make it really difficult to do what is necessary.

A final decision from the Ministry of Commerce is expected in November.

In April 2021, the The National Association of Homebuilders (NAHB) of the United States has called on President Joe Biden and his government to enter into a new long-term Canadian softwood lumber trade deal.

A letter was written for Katherine Tai, United States Trade Representative showing timber prices, which at that time had tripled compared to the same month in 2020.