There are over 58,000 names inscribed on the Vietnam Wall, including 1,208 in Alabama. There are 20 names on the Covington County Vietnam Wall

The City of Andalucia and the Covington Veterans Foundation will be bringing the Vietnam Traveling Wall to Andalucia in the summer of 2022. Those of you who have not visited the Wall in Washington, DC, will have the chance to see these names and perhaps, to search for a relative, friend or classmate. On the 13th sign, line 72, you will find the name of PFC George Wallace Jones, who died on December 22, 1966.

George Wallace Jones was born in Covington County, Alabama on January 20, 1945. His parents were Willie Lee and Mattie Crittenden Jones of Red Level, Alabama. George was the ninth of twelve children. Willie was a sharecropper and the kids helped out on the farm when they were old enough.

At home and at school, George was calm and modest. This is the description given by several of his classmates to Woodson and by his surviving siblings. His sister, Mattie Jones Freeney [who provided much information to the author], recalled their family life, “Everything my mom cooked was what we ate, including leftovers. George didn’t like vegetables or leftovers. I remember one time George walked in through the front door and smelled the smell of cooking peas – he just continued on and walked out the back door.

George attended Woodson High School in Andalucia, Alabama, where he was active in sports. George is remembered by friends as a good running back on the football team from 1961 to 1964. He was also an outstanding sprinter on the track and field team and attended the track and field competition in the state in its final year.

By the time George graduated from Woodson in 1964, he was tired of the harsh farm life and decided to leave home. He and his brother Paul traveled to California to stay with an older brother, Willie Lewis Jones. George worked in a restaurant for about six months before deciding to join the Job Corps.

In July 1965, George traveled to Kilmer, New Jersey, and joined the Job Corps. They helped some students complete high school and taught others technical skills that would help them get jobs. George spent time in the classroom as part of the academic program and also joined the track team. Kilmer’s Jobs Corps published an article, The Corpsman, who wore a picture of George in his track uniform and described him as a “Outstanding athlete”. 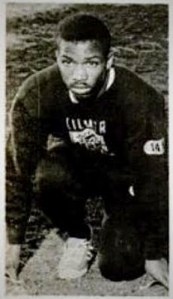 George remained at Kilmer until his enlistment in May 1966. After basic training he was able to return home on leave before heading to Vietnam in October 1966. George’s family had a sort of homecoming for him. His brother, Moses remembered, “I went home to see George. He was very calm and didn’t speak much. I saw him sitting there, just looking at the wall. When I said something, he didn’t respond at first, like he was preoccupied. I wondered later if he had had some kind of premonition.

At the time of his enlistment, some of George’s records indicate that he resides in California, having established his legal residence there while working at the restaurant. He began his tour in Vietnam on October 27, 1966. He was assigned to Company B, 2sd Battalion, 8e Cavalry Regiment, 1st Cavalry division. His rate was PFC and his military specialty was listed as an indirect fire crew member.

There is very little information available on George Jones’ Vietnam tour. He was killed in action on December 22, 1966. Records indicate that he died of small arms fire during a combat operation in Quang Tri province, South Vietnam.

Back in Kilmer, The Corpsman reported his death. George had corresponded with one of his former university professors, Miss Bernice Kaplan. She had mailed George a Christmas card and it was returned, marked “Deceased” by mail. Miss Kaplan said The Corpsman that George’s letters had continued almost until the day of his death. She recalled that he was scared when he arrived in Vietnam but felt very relaxed later. He told her he was planning to go to college after his tour was over. The diary said a sympathy card was being prepared, signed by the Corpsmen and would be sent to Jones’ parents, Mr. and Mrs. Willie Lee Jones of Red Level, Alabama.

The Jones family received news of George’s death shortly thereafter. However, it took several weeks before he was brought home. The funeral was held at the New Pilgrim Baptist Church in River Falls, Alabama, and he was buried with full military honors in the Bethlehem Cemetery. Marshall Funeral Home was in charge of the services.

The author thanks Mattie Jones Freeney, Paul Jones and Mose Jones for their help in writing about their brother.