Soldiers prepare the USAV Aldie, a landing craft, in Grenada for a training exercise in 2016. The Aldie and four other Army landing craft were identified by a commission to have their names cleared references to the Confederacy, according to a report submitted to Congress on Monday, Sept. 19, 2022. (Heidi McClintock/111th Public Affairs Detachment)

WASHINGTON — The names of five Army landing craft should be removed from references to the Confederacy while four civil engineering projects named after Confederate fighters should be considered by Congress, according to a report submitted to lawmakers on Monday. .

The third and final report produced by the Naming Commission, a group convened by Congress to rename Confederate-affiliated elements within the Department of Defense, lists more than 1,100 assets flagged for modification or deletion and singles out several more in detail.

Members of the eight-person commission initially identified nine landing craft with names that might be affiliated with the Confederacy, but ultimately determined that five boats were clearly linked to it, according to the report. The army has 32 active landing craft.

Harpers Ferry, Malvern Hill and Mechanicsville are based at Yokohama North Dock in Japan. Chickahominy and Aldie are stationed at Joint Base Langley-Eustis in Virginia. 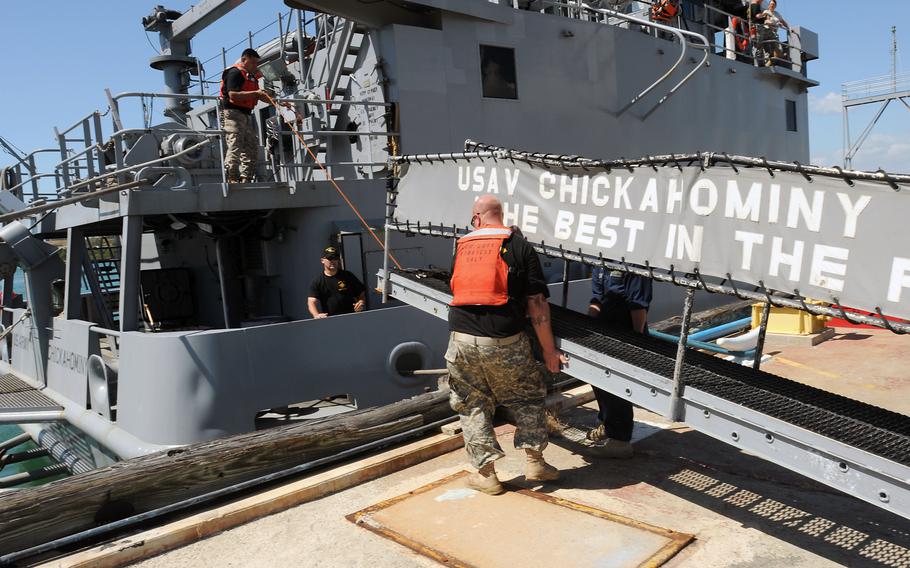 Crew members of the USAV Chickahominy, a landing craft, set up the gangway after docking at Naval Station Guantanamo Bay, Cuba, in 2011. The Chickahominy and four other landing craft from the military were identified by a commission to have their names removed from references to the Confederacy, according to a report submitted to Congress Monday, Sept. 19, 2022. (David P. Coleman/Joint Task Force Guantanamo Public Affairs)

In its final report, the commission called for the renaming of the USS Chancellorsville and USNS Maury and the Air Force’s Fort Fisher Recreation Area in North Carolina, as well as the counting at its base of the Confederate Memorial at Arlington National Cemetery in Virginia.

The commission also reviewed several U.S. Army Corps of Engineers civil works, finding four assets with Confederate names that are owned or controlled by the Department of Defense. The Corps is an army engineer formation.

The commissioners included civil works in their review of military assets, but declined to offer naming recommendations for them because of their overlap in ownership and management with individual states, the report said. The committee instead defers a decision on their names to Congress.

The report provides a long list of commission-approved names that could be used for renaming. The commission collected over 34,000 name suggestions and comments from the public, resulting in over 3,600 unique names.

The Secretary of Defense is required to implement a plan to rename, change, or remove Confederate-related names, symbols, displays, monuments, and paraphernalia by January 1, 2024. The cost of the work has been estimated at $62 .5 million dollars.